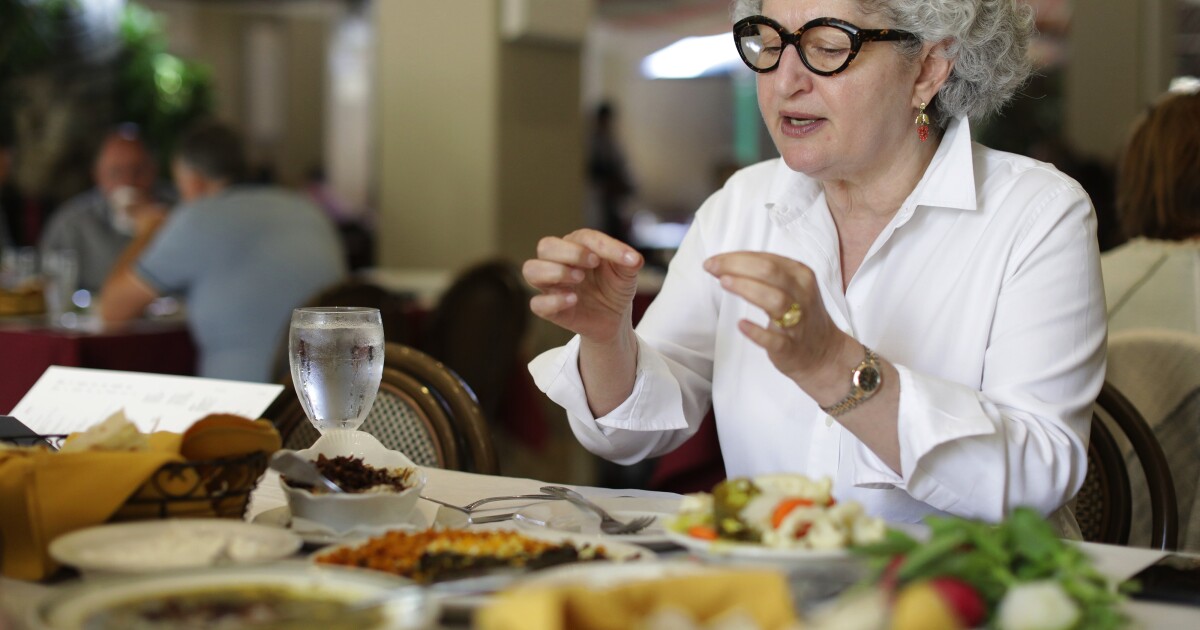 I’ve been thinking a lot lately about the life and career of Anissa Helou, the cookbook author (among many titles) who is one of my favorite people on the planet. She turned 70 this week.

For anyone needing inspiration to persist through professional highs and lows, consider the stumbling block Anissa faced a decade ago around her 60th birthday. She was finishing her most personal work to date, a book called “Levant: Recipes and Memories From the Middle East.”

Born to a Lebanese mother and Syrian father and raised in Beirut, she turned her focus to food in her 40s after a career as an art consultant. “Levant” was a full-circle project for her: Her first book, “Lebanese Cuisine,” published in 1994, had translated her mother’s cook-by-feel-rather-than-measurement repertoire into precise, illuminating recipes. With its chapters on stuffed vegetables, variations on raw and cooked kibbeh and delicate savory pastries, and with snippets of Lebanon’s history and culture on nearly every page, it was the most authoritative catalog of the country’s cuisine ever produced in English. If you ask me which book I’d most like to cook through from cover to cover, it’s this one.

Enjoying this newsletter? Consider subscribing to the Los Angeles Times

Your support helps us deliver the news that matters most. Become a subscriber.

As a teenager, Anissa watched the women in her family seemingly bound to the stove and, absorbed then in the works of Simone de Beauvoir, she vowed that lot in life would never be hers. As an adult, though, she came to cooking with the eye of a cultural preservationist. A tireless researcher and constant traveler, she went on to write books about street food traditions in Morocco and around the Mediterranean; a guide to savory baking in the region; a volume of ideas on modern mezze; and a tome on offal called “The Fifth Quarter.”

“Levant” returned to the subject of her upbringing: summers in Syria where she was riveted by her aunt’s skill in the kitchen; meals in the mountains of Lebanon not far outside Beirut; and memories of the city before the Lebanese Civil War (which lasted roughly from 1975 to 1990) forever changed its character. It’s a cookbook you can read like a memoir, though you’ll also yearn to make Turkish stuffed mussels or an omelet ingeniously flavored with the pulp of zucchinis saved after they’ve been hollowed for stuffing.

It reads like a literary effort in appearance too. As the book was going into production its photographer suffered a burglary and he lost the photographs meant to be an essential part of its design, including many images of Syria that couldn’t easily be replicated given the county’s then-sudden unrest. The publisher went ahead with “Levant,” but without colorful imagery it flopped and quickly fell out of print in physical form.

I love the book and hope that a used copy finds its way into your hands.

“I was dejected but not depressed,” Anissa said to me recently about that period. It coincided with the Arab Spring, and she perceived Muslims being overly generalized and portrayed as villainous in the media. She was raised as Christian but grew up in Hamra, a predominantly Muslim neighborhood, in Beirut. At one point she’d considered tackling an encyclopedic survey of Middle Eastern foods. Instead, she began traveling the globe documenting the culinary riches of Islam.

In May 2018 Ecco Press published her ambitious feat of research and culinary anthropology, “Feast: Food of the Islamic World.” A map that opens the book reveals its geographic breadth, stretching from Senegal and Nigeria through Western Asia, Uzbekistan and Xinjiang to Malaysia and Indonesia. As many reviewers noted, its brilliance lies in the connectivity Anissa weaves among cultures through recipes. Page after page of rice and meat dishes might look repetitive, but their specificity and distinct techniques elucidate what distinguishes, say, an Indonesian biryani flavored with lemongrass and simmered in coconut cream from Malabar chicken biryani perfumed with saffron, rosewater and garam masala.

After the previous fiasco, the book was a triumph — an award-winning success, yes, but more important a cultural document on a subject too little covered in the West and published at a time when American food media was beginning to reckon with its issues of siloed representation. Also, the photography is stunning.

I remember the rainy late-spring day in Manhattan when Anissa gave me a copy of “Feast.” “It’s heavy,” she said, beaming. “Almost two-and-a-half kilos!” The first thing most anyone notices about Anissa is her hair — wavy strands, once dark and now shimmery silver, that look like a chorus of sound waves rendered visible. This day she was, as always, wearing one of her stacks of white button-down shirts, part of her signature travel uniform.

It was around the time of the publication of “Levant” that my closest friend, Caline, knowing that she’d ignited my culinary interest in her native Lebanon, suggested that I start following Anissa on social media. In 2015 when I traveled for work to London (where Anissa lives part-time), we met up for lunch at Lyle’s in Shoreditch, one of her favorite restaurants. I’d caught her the day before she was leaving for another long trip. We fell into an easy friendship, cemented by occasional meetups around the U.S., eating through the Levantine restaurants in Dearborn, Mich., or as many Iranian dishes as we could manage in Los Angeles and Orange County.

As a restaurant critic, I’m grateful for the doors she opens into a sublime cuisine I could never fully know through public dining rooms. Personally, I’m in awe of her fearlessness. She will go anywhere in the world to satisfy her curiosity. She shuttles between London and Sicily, the latter because it reminds her of Lebanon and Syria, and she’s public about her love-hate relationship with her native Beirut. Though beautifully human, in her world view she doesn’t particularly care what you think of her. (I’m trying to absorb this lesson as I age.) Her humor leans wry: When she turned 60 she threw a party with a theme of “one foot in the grave.” Is it ironic that the month she turned 70 she’s recovering from bunion surgery?

Anissa doesn’t strike me as particularly dwelling on her age. Over the phone this week I asked about what she’s plotting next. She’s considering a memoir: “My life has been rich, but I haven’t come to terms with how to tackle it — and why it would be interesting to others.”

More pressing, she’s planning to update “Lebanese Cuisine” for its 30th anniversary. With the globalization of food, readers are wiser to cultural nuance — the chapter on mezze need not refer to them as “hors d’oeuvres,” for example — and there’s an urgency, given Lebanon’s financial crisis and subsequent catastrophes, to record its endangered traditions.

If I disappear on a long leave from The Times, you’ll know I’ve departed for the Levant to volunteer as her research assistant.

Daniel Hernandez reports on the Whittier taco truck operator arrested after allegedly vandalizing a competitor’s stand. “The incident highlighted one of the many challenges facing the murky, often self-governing world of street vendors in Los Angeles County: a climate of competition over available public space to establish a clientele that often pits taco sellers and other street-food vendors against one another,” he writes.

Rachel Schnalzer has a piece on the trailblazing career of Black winemaker Iris Rideau.

Next post Ten of the World’s Rarest Foods, and Where to Find Them | Travel