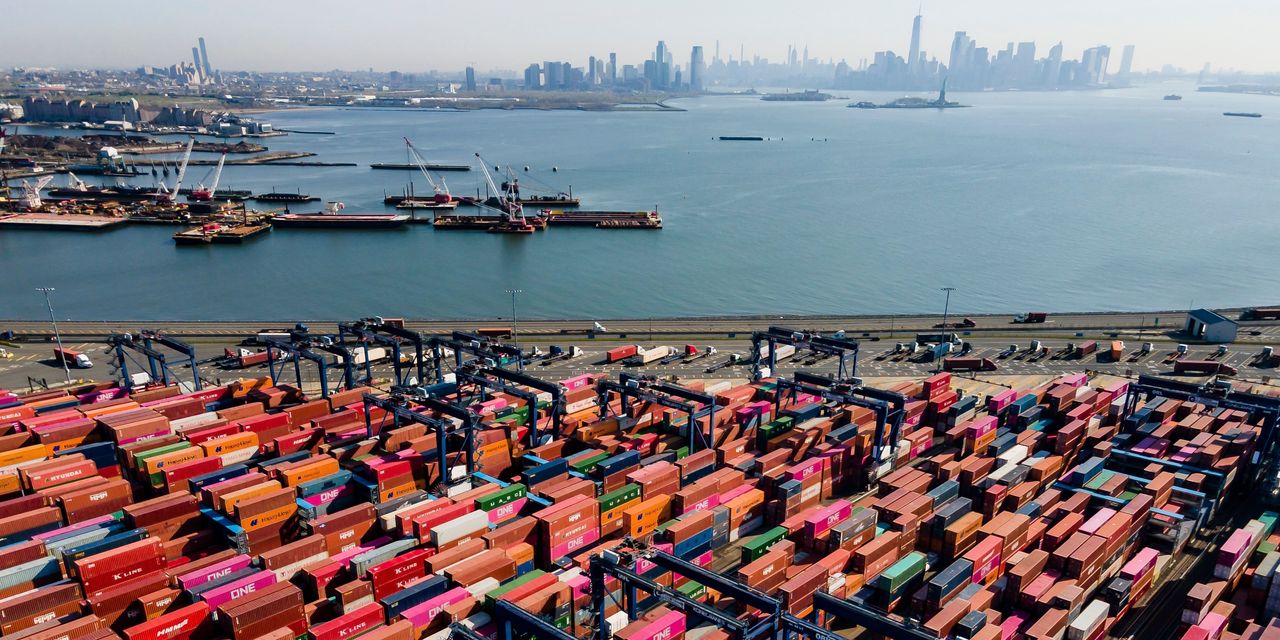 The cargo surge swamping U.S. ports for almost two years is starting to overwhelm the Port of New York and New Jersey.

A backup of container ships waiting outside the East Coast’s busiest port last week reached an average of 14 vessels a day, the highest it has been since the Covid-19 pandemic began battering supply chains.

Port officials are talking to ocean carriers, truckers and warehouses to ease the logjams amid expectations of a stronger rush of shipments in summer as the peak shipping season begins, said

executive director of the Port Authority of New York and New Jersey.

“It’s all hands on deck to try to pull every lever that’s available,” he said.

The backup is a concern for shippers seeking alternatives to the nation’s busiest container port complex at Los Angeles and Long Beach, where congestion has severely delayed shipments and where looming labor contract negotiations with West Coast dockworkers could threaten further disruptions.

Lengthy backups have formed since last year at California’s Port of Oakland, the Port of Savannah, Ga., and the Port of Charleston, S.C., as container ships sought to sail around the Southern California congestion. Container volumes have swamped port operations for weeks at a time, delaying deliveries of electronics, apparel and other goods.

New York and New Jersey weathered last year’s roughly 20% nationwide increase in cargo imports better than other U.S. ports, but that started to change this year as import volumes slowed on the West Coast and continued to climb in the east.

Top news and in-depth analysis on the world of logistics, from supply chain to transport and technology.

The sustained rise in East Coast imports is being driven, in part, by retailers and manufacturers trying to spread supply chains and avoid having most of their inventories stuck at a single port.

Double-digit import growth at the Los Angeles-Long Beach complex slowed to 2.7% in the first quarter from a year earlier. At New York and New Jersey, first-quarter imports rose almost 12% from the same period last year.

Bethann Rooney, who took over as director of the New York and New Jersey port operations on May 2, said the port’s cargo-handling facilities began struggling early this year as shippers took longer to pick up imports from docks and as empty containers piled up waiting to be returned overseas.

She said the port’s container yards are clogged with 120,000 empty boxes, more than double the usual number. The port plans to open 10 acres of land to store empty boxes and ease some of the congestion.

The buildup of containers is slowing cargo-handling operations and frustrating truckers, who said privately-operated cargo-handling facilities are refusing to accept empty containers for days or weeks, which ties up their trucking equipment.

Thomas Villacampa, regional vice president at trucking firm H & M Intermodal Services in Kearny, N.J., said more than half of his fleet of 400 trailers for hauling containers is stuck holding empty boxes waiting to be returned to the port. That prevents his drivers from picking up imports and delivering cargo to warehouses and distribution centers.

“It cripples us,” Mr. Villacampa said. “If we were able to return these empties we could probably do two to three times more than we are doing now.”

The increased congestion at the Port of New York and New Jersey coincides with a seasonal lull in shipping and as Covid-19 lockdowns in China have cut into manufacturing, slowing imports. But Ms. Rooney said she expects a sharp upturn in imports in a few months as the peak shipping season begins, adding the port is working to get facilities operating as efficiently as possible by then.

Port congestion has been a leading cause of product shortages during the pandemic and has helped fuel higher freight rates and supply-chain costs, which have helped push inflation in the U.S. to a 40-year high.

Ms. Rooney said she asked representatives of some of the world’s largest ocean shipping lines on Monday to provide similar relief for her port.

Ms. Rooney said she told them, “We’ve got a problem in New York, New Jersey with empties, and I need them to solve it proactively because we don’t want the White House…coming knocking on our door.”