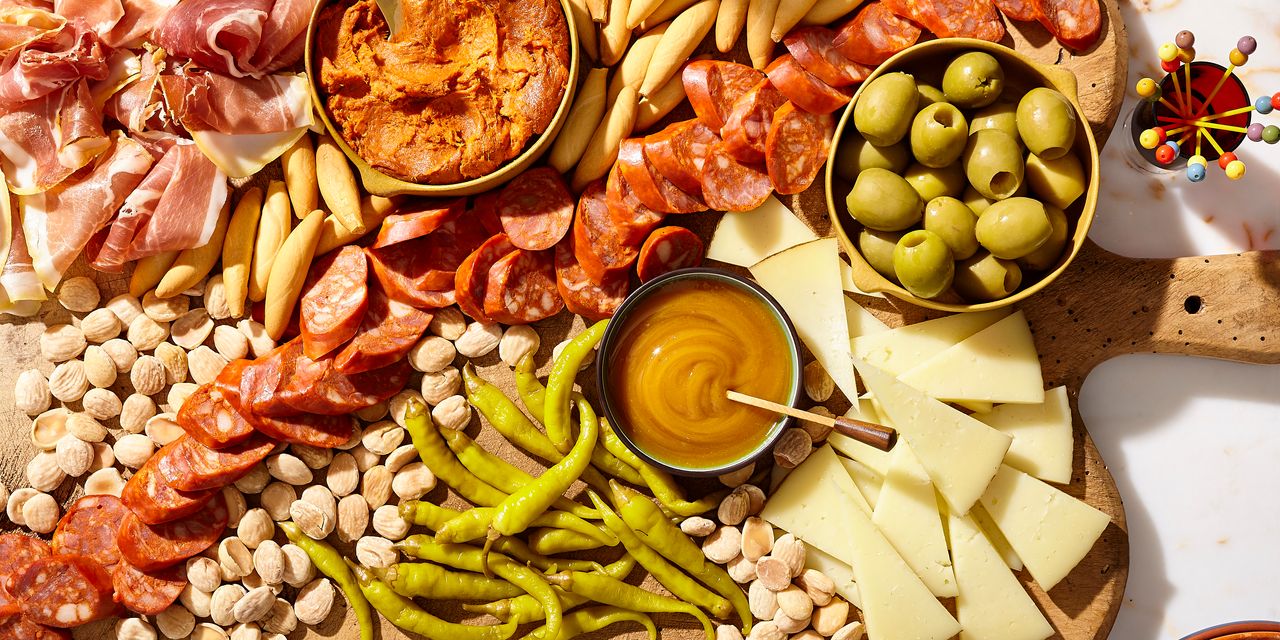 OF ALL THE pandemic food fads—from beans to bread baking—nothing laid bare our collective psyche quite like the charcuterie board. Social media was flooded with salami rivers snaking around hills of cheese and breadsticks strewn like fallen trees. We became obsessed with boards because we were, quite frankly, bored.

Now, as we ease back into in-person entertaining, the no-cook, interactive snack board is the best expression of how we eat now. But this story doesn’t begin with the pandemic (though logistics play a big part).

Buying cured salmon at an appetizing store like New York’s Russ & Daughters, for example, made more economic sense than hiring a caterer.

In the 1960s, as jet travel ascended, so did the number of Americans vacationing overseas, and they returned hungry for such items as European cheeses and olives. In 1966, Julia Child, co-author of “Mastering the Art of French Cooking” and star of the pioneering public-television cooking show “The French Chef,” graced the cover of Time magazine. The cover story chronicled America’s “concern with good eating,” citing “rapidly expanding” gourmet counters in supermarkets as the “handsomest profit earners.”

In the same article, a Washington, D.C., market manager warned, “[If] you don’t have at least 50 assorted, high-powered imported cheeses, you’re not in business.” To understand the snack board right down to its DNA, look to the purveyors and importers who made it possible.

(later FedEx) began shipping, making once-rare foods more accessible across the country. Berkeley, Calif., earned the nickname “Gourmet Ghetto” with its proliferation of specialty markets. In New York City, Zabar’s had transformed from a humble appetizing store to one of the city’s largest groceries. And in 1977, Joel Dean and Giorgio DeLuca opened the gourmet shop Dean & DeLuca in Manhattan’s SoHo neighborhood. “DeLuca set up his own import and distribution business, serving not only Dean & DeLuca but stores and restaurants throughout the country,” writes David Kamp in his book “The United States of Arugula: How We Became a Gourmet Nation.” In waves of quality olive oil, balsamic vinegar and sun-dried tomatoes, the Dean & DeLuca effect rippled across the U.S.—from the West Point Market in Akron, Ohio, to Napa Valley’s Oakville Grocery.

In 1982 in Ann Arbor, Mich., Zingerman’s Deli opened, featuring classic Jewish foods along with prosciutto and an array of fine honeys. “It’s called specialty foods today, but in Ann Arbor what we did then was considered weird,” co-founder Ari Weinzweig said. Customers wanted weird, and small specialty stores exerted outsize influence. “As these businesses developed in the late ’70s and early ’80s, there was an adaptation of some of these trends into supermarkets,” said Rob Kaufelt, who learned the business in his family’s chain of Foodtown supermarkets and went on to build the Greenwich Village shop Murray’s Cheese into a gourmet destination.

In the 1990s, the internet offered a new way to shop, and Dean & DeLuca opened stores throughout the U.S. In the new millennium, “the American farmstead movement really took off, especially for cheese and charcuterie,” noted Mr. Kaufelt. But imports remained important. “With the products of Spain, for example, the explosion of [chef] Ferran Adrià and tapas caused more U.S. chefs to use products like chorizo, marcona almonds and piquillo peppers,” said Angelica Intriago of Despaña Brand Foods, which expanded from wholesaler to retailer in 2006. “Importers started bringing them in, and consumers started trying them, too.” Whole Foods, Trader Joe’s and

plied customers with samples, a move that helped some specialty product lines grow by as much as 2000%, Supermarket News reported in 2005.

purchased Whole Foods. Perhaps the accessibility—and competition—led Dean & DeLuca (now owned by a Thai corporation) to close most of its U.S. locations, including its SoHo flagship, in 2019. Yet specialty foods, now a $170 billion industry, continues to grow, according to the Specialty Food Association.

How to build a board now

While the pandemic put a pause on socializing, we kept on snacking, even amid rising food costs and supply-chain issues. Today, a new generation of gourmet pros is shaping the way we snack.

What are your tips to assemble the perfect snack board? Join the conversation below.

Cheese-plate influencer and food stylist Marissa Mullen, based in Brooklyn, N.Y., offers inspiration on Instagram at @thatcheeseplate and peddles shippable ready-to-eat cheese and charcuterie boards via the website of the same name. Ms. Mullen’s book “That Cheese Plate Will Change Your Life” guides readers through her Cheese by Numbers method for building a spread. Here, she lays out the basics:

1. Plot your architecture. “First, choose your board. You can use a cutting board, cookie sheet or platter. If you are using spreads, jams, olives or anything ‘drippy,’ arrange appropriately sized ramekins on the board. Then arrange your cheeses, meats and produce. Fill in the gaps with crunchy items; fill your ramekins and finish with garnishes.”

2. Pair amicably. ”Make sure everything makes sense together in terms of flavor. We’re meant to eat the board, it’s not just for a photo.

3. Venture beyond the obvious. “Tinned fish is trending and a great element to include. Remember, you don’t have to stick to pork salami.”

4. Harness pickle power. “With produce, instead of just keeping it to fresh fruits and vegetables, add depth with pickled red onions or quick-pickled cucumbers.”

A wooden cutting board displays snacks that transport you to a tapas bar.

Rich, salty serrano ham brings depth to the board. $11 for 2 ounces, despanabrandfoods.com

Spicy Chorizo makes a perfect picante “river” while drawing the eye across the array. $12 for .9 pounds, despanabrandfoods.com

Orange blossom honey from Valencia brightens everything on the board. $22, tienda.com

The olive-oil bread sticks known as picos camperos are ideal for dipping. $12 for 6.35 ounces, tienda.com

Brooklyn caterer and cookbook author Jenn de la Vega specializes in “mashing up experiential with visual art and food,” according to her website, Randwiches (randwich.es). Building community is central to her work, and her eye-catching grazing boards draw guests in. She advises:

1. Think about a theme. “Are you presenting a particular cuisine? I’m seeing a trend toward international themes—a great way to expose yourself and others to new foods.”

2. Make it user-friendly. “Make sure everything is grabbable and easily handled. Don’t put on anything that requires further sawing with a knife or is work to eat. Anything that’s too drippy or spreadable needs to be in a ramekin with the appropriate serving implement. Part of the appeal of the snack board is its ease.”

3. Spread the love. “There are so many spreadable possibilities. I love including dippy things, like hummus, on snack boards.”

1. Keep it simple. “Remember there is a lot of prep work with cutting cheese and making salami roses and washing all the fruit. You don’t need 20 different ingredients. You’re going to have a lot left over if you do.”

2. Think about the bottom line. “Including a lot of ingredients can get surprisingly expensive.”

3. Add something unexpected. “Some of my favorite ingredients are: edible flowers, which always dress up a board; toasted chickpeas, which look nice on top of hummus and add texture; flavored goat cheese; pepper jelly; and infused honeys. These all take boards to another level.”

1. Shop curiously. “Sample all you can and ask for recommendations. Don’t be afraid to try new things.”

2. Change up your cheeses. “Choose something creamy, something familiar and mild, and something aged. Combine a variety of sheep’s, goats’ and cows’ milk.”

3. Map it logically. “Place the things that go together next to one another. Make it easy for your guests to eat.”

At their Santa Monica, Calif., shop Lady & Larder, sisters Sarah Simms Hendrix and Boo Simms offer American-made cheese and charcuterie as well as everything from caviar and craft beer to fresh bread and flowers. With their cheese, charcuterie and crudités boards, delivered across L.A. and nationwide through

they curate those elements into satisfying compositions following a few basic principles:

1. Seasons are a great inspiration. “Always use what’s in season near you. Tell the story of the season. October, for example, should look like October on the board.”

2. Serve at room temperature. “Pull your cheese and charcuterie out of the fridge an hour before you are going to enjoy them. You want to bring out all the flavor.”

3. Aim for equilibrium. “Include elements of soft, hard, crunchy, salty, sweet, acid. If all of those things come together, they form a beautiful balance.”

4. Waste not. “You don’t have to go to Costco and buy giant blocks of everything. A couple of ounces per person for each element is enough.”

Fancy snacking through the decades

The Specialty Food Association was founded by food makers, purveyors, importers, distributors and retailers in 1952. In 1954, the group gathered for the first Fancy Food Show, featuring 82 exhibitors, in New York City. That show is now a biannual event, drawing as many as 1,400 exhibitors per show.

1970s: A Food Revolution and the Era of Aspic

The Wall Street Journal is not compensated by retailers listed in its articles as outlets for products. Listed retailers frequently are not the sole retail outlets.